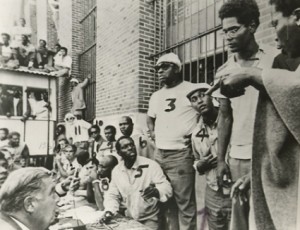 Please join us for an evening to remember the Attica prison uprising, explore prison abolition and honor Eddie Ellis, a living legend. Son of Jamaican immigrants, Ellis was born in Harlem, December 1941. At the age of twenty-five, he was director of Community Relations for the New York City branch of the Black Panther Party. In 1969, caught up in the infamous FBI operation which systematically attacked organizations like the Panthers and other radical groups, Ellis was arrested and accused of killing a man he had never before seen, had no connection to, and no motive for slaying. While serving a twenty-five year sentence in New York state prisons for a crime he did not commit (from 1969 to 1994), Ellis survived the Attica massacre and was a trailblazer for prison education. He continues to advocate for economic and social justice and is now spearheading policy reform across the nation. The event will include film clips and a panel discussion.

Hosted by Professor Charles J. Ogletree, Jr.
Panel will include:

Including excerpts from the film The Last Graduation: The Rise and Fall of College Programs in Prison.