Mark your calendars! Jobs Not Jails is hosting a Rally to End Mass Incarceration and Fund Job Creation on Saturday, April 26th at 1:00 pm on the Boston Common. 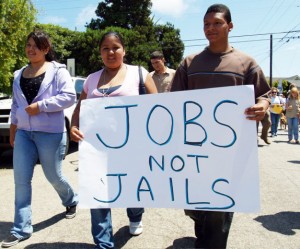 The Patrick Administration has estimated that, if current criminal justice policies are not changed dramatically, the Commonwealth of Massachusetts will have to spend $2 billion in the next seven years, to build 10,000 new prison units, as well as $150 million more each year to fill them.  Massachusetts already has one of the highest rates of incarceration in the world – on par with French Guiana and Kazakhstan.  There are so few opportunities, and so many barriers to successful re-entry, that most (>60%) of prisoners released from DYS, county jails, and prison recidivate within 3 years.

Meanwhile, we are sliding quickly away from a full-employment economy. Businesses are shedding entry-level and middle-class jobs at an alarming rate, as many functions such as check-out clerk and warehouse operator are automated. Massachusetts has lost 100,000 manufacturing jobs just in the last six years.

Other states – including New York, Washington and Texas – have overhauled their criminal justice systems using practices that are proven effective, and so reduced their prison populations that they have closed prisons, saving taxpayers billions of dollars.

Massachusetts can do the same, by ending practices that are proven ineffective, and implementing the best of what other states have already proven can work.  For example:

Many of these proposals are on the table in Massachusetts, and grassroots organizations are working to win each of these vital reforms. Together, we are building the infrastructure to engage thousands of people in a campaign to stop $2 billion of prison construction, and re-direct those funds into creating good jobs for people in low-income, high-crime neighborhoods.