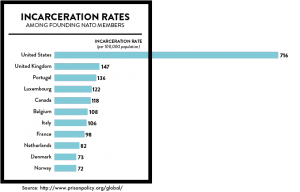 As summarized from States of Incarceration: The Global Context Report:

In a simple graphic (seen in the report), the Prison Policy Initiative charted the comparative incarceration rates of every U.S. state alongside the world’s nations. While there are certainly important differences between how U.S. states handle incarceration, placing each state in a global context reveals that incarceration policy in every region of this country is out of step with the rest of the world.

The States of Incarceration: The Global Context report concludes, these data reveal that even the U.S. states that incarcerate the smallest portion of their own citizens are out of step with the larger community of nations. As U.S. states continue to reevaluate their own hefty reliance on incarceration, we recommend that they look to the broader global context for evidence that incarceration need not be the default response to larger social problems.