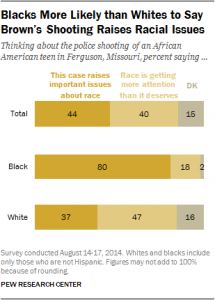 A recent national survey conducted by the Pew Research Center found that there are stark racial differences in reactions to the Aug 9 shooting of unarmed teenager, Michael Brown, by a police officer in Ferguson, Missouri. In fact, blacks were found to be twice as likely as whites to say the shooting “raises important issues about race that need to be discussed.”

Reactions to the shooting not only differ by race, but also by political party affiliation. As survey summary states: “Reactions to last week’s events in Ferguson divide the public by partisan affiliation and age, as well as by race. Fully 68% of Democrats (including 62% of white Democrats) think the Brown case raises important issues about race that merit discussion. Just 21% of Democrats (including 25% of white Democrats) say questions of race are getting more attention than they deserve. Among Republicans, opinion is almost the reverse – 61% say the issue of race has gotten too much attention while 22% say the case has raised important racial issues that need to be discussed.”

Read the detailed summary of the survey results here.

The national survey was conducted by telephone interview Aug 14-17th, 2014 among 1000 adults (18 years or older); “whites” and “blacks” only include those who do not identify as “hispanic.” Read more about the survey methodology here.